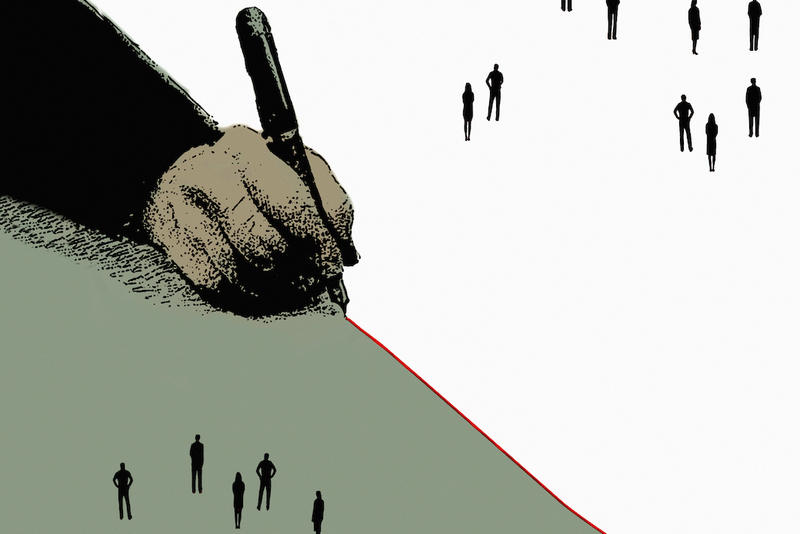 How is America going to resolve our racial division?
The answer I found in scripture could change everything and heal the great divide.

Acts 10 tells the story of the first Gentile converting to Christianity.
Cornelius, a Roman officer, a gentile was on the opposite team of Peter the Apostle.
Cornelius could have been a Gestapo, the secret police of Nazi Germany.
Peter would have been like Jews under occupation during WWII.

They had so much in common.
Cornelious and Peter believed in the same God.
They were devout prayer warriors.
They were devoted, family men.
They were zealous to defend their faith.
They were charitable to others.

But God had a plan to reconcile Jews and Gentiles.
God gave both men visions in which they discover their need for one another.
Putting these two people together is like oil and water. There's no mixture.
For Peter, it would have been forbidden to visit and communicate with Cornelius.

Then in Peter's vision, the angel revealed he needed a man to experience the fullness of redemption and reconciliation.
God could have easily explained who needed redemption, but no, he wanted Peter to go see a man bring forth this vision and full picture of redemption.

A Gentile, a Roman soldier needed a Jew to explain salvation.
A Jew, a Messianic apostle needed a Gentile to experience reconciliation.

What is God's goal here?
He was trying to open both Cornelius and Peter to a greater plan.
God was trying to connect these two people with opposite world views.
He was using their mutual need for salvation to create a reconciliation bridge.

So while Cornelius's men are on their way, Peter is waiting for lunch to be served and he has his vision. Is it a parable regarding food? Or does it mean something else?
Peter has spent his whole life making sure he eats everything Kosher, nothing impure or unclean. Now all of a sudden, this angel in this vision was telling Peter he can and should eat anything and everything he saw in his vision.

This would be a dream come true for me. God giving me the authority to binge at the buffet would not have needed any further interpretation.
But Peter is conflicted. He knows this vision is from God and this angel is from God, yet he feels what is he is being told is wrong.

Acts 10:19-20 state, "While Peter was still thinking about the vision, the Spirit said to him, 'Simon, three men are looking for you. So get up and go downstairs. Do not hesitate to go with them, for I have sent them.' "

The Journey to reconciliation is uncomfortable, to say the least.
Peter goes to greet these men asking them why they have come for him.
They explain why they are there and then Peter goes with them to Cornelius's house.
Acts 10:25-26,28 tell about their first moments together:
"As Peter entered the house, Cornelius met him and fell at his feet in reverence. But Peter made him get up. 'Stand up,' he said 'I am only a man myself.'... He said to them: 'You are well aware that it is against our law for a Jew to associate with or visit a Gentile. But God has shown me that I should not call anyone impure or unclean.' "

Step into Cornelius's living room.
Neither of these influencers is feeling secure about this rendezvous.
Cornelius is expecting to be judged and Peter is awaiting search and seizure.
It is a bold act of faith for them to abandon tradition and to seek understanding.

Cornelius has gathered his family and anyone of importance to him.
Peter's presence is like a visitation from God. Cornelius is hoping that the message from Peter will validate his hunger for the living God.

The lightbulb comes on for Peter.
Peter steps past the threshold into a Gentile's home in faith.
It is not until Peter steps into Cornelius's home that he realizes Jews and Gentiles are equal.
Acts 10:34: "Peter said, 'Now I know for the certain God doesn't show favoritism with people but treats everyone on the same basis."

Now I know why God gave me that vision about animals and food.
It was because God is no respecter of persons. No race is superior to another.
All men are created equal.

Before this moment Peter did not believe a Gentile could be saved.
But now, as the Holy Spirit comes, He says that God shows no favoritism.

No sooner as those words came out of his mouth did history start to change.
At this very moment, a seed for the salvation of the Gentile world is birthed.
NO ONE HAS TO BE LOST. NO ONE.

" It makes no difference what race of people one belongs to. If they show deep reverence for God and are committed to doing what's right, they are acceptable before him." (Acts 10:35)

God is confronting the theology that the Gentiles are unclean by birth.
The four corners of the Earth just received God's plan for salvation.
The Jews were chosen to be the carriers of the gospel and salvation not superior to anybody else.
God has declared every human being to be of special worth and dignity.
The Jews put the label of "unclean" meaning "forbidden" on the Gentiles, but God never said that.
The Gentiles are born without God that makes them common. They were made unclean by the judgment of the Jews which was taught over time because the Gentiles were uncircumcised.

It is OUR judgments about people that have created the boundary NOT God.
GOD DOES NOT CREATE SOMETHING UNCLEAN.

So what becomes of this meeting with Peter and Cornelius?
It turns into a revival.
" While Peter was speaking, the Holy Spirit cascaded over all those listening to his message. The Jewish brothers who had accompanied Peter were astounded that the gift of the Holy Spirit was poured out on the people who weren't Jews..." (Acts 10:44-45)

Plus Cornelius and his family were water-baptized after they were filled with the Spirit of God. Peter recommended for them to be baptized. They were made clean. They were circumcised in their hearts. They were liberated from the tyranny of sin. There is no longer a wall of separation dividing them.

The answer for racial division is a fresh outpouring of the Holy Spirit that baptizes us and transforms our hearts. We will become cleansed of all hatred of one another when we go down to the Jordan and get baptized.